The EB-5 visa is the best solution for those Hong Kong residents who have big capital and want to immigrate to the United States. It allows applicants to simply obtain permanent resident status and then citizenship.
This program was created in 1990 but has really gained popularity in the last few years. In 2005, a total of 332 petitions on EB-5 were submitted to the Immigration Service. In 2012, the number of issued visas increased by almost 10% in comparison to the indicator of 2007.
Hong Kong hasn’t become an exception in this searching for better life and protection from financial and political threats. According to the statistics data, the number of issued visas for HK investors reached two hundred. That is 2.1% of the total amount. To note, the country is followed by Mexico, Canada, Great Britain, UAE, Germany, and some other lands.

Applying to EB-5 — is it a modern trend or necessity for the Hong Kong S.A.R. citizens? Let’s find out!

Why Do Hongkongers Want to Move to the USA?

Hong Kong is considered to be the third world financial capital after New York and London. For a quarter of a century, it has been recognized as one of the states with superior economic freedom. According to the Heritage Foundation statistics, the autonomic region ranked first among other Asia-Pacific lands in 2019. In comparison to the indicators of 2019, labor freedom and judicial effectiveness went down. Without a strong and independent legal system, the country has all the chances to lose its status. Hong Kong’s economy also suffers from the trade war that President Donald Trump unleashed in an effort to reduce the US trade deficit with China. However, that is not the only reason why the situation is getting worse. Started in summer 2019, mass protests against the bill to extradite the accused citizens to China grew into demands for wider region’s democratization. The overall political breakthroughs began to further influence retail sales, the influx of tourists, and the cornerstone of the Hong Kong economy — the real estate market. The Hong Kong Chief Executive, Carrie Lam, even noted that the current sharp economic slowdown was worse than during the severe acute respiratory syndrome (briefly, SARS) epidemic in 2003. The population was afraid of Beijing’s suppressing the strikes. As a result, such uncertainty undermined the business climate, making the businessmen postpone investment decisions and cancel the deals. In July-September, the city’s GDP decreased by 3.2% compared with the previous quarter. Experts confirm that is the worst economic result since the 2008 global financial crisis.

To get more details about every step, contact our experts. 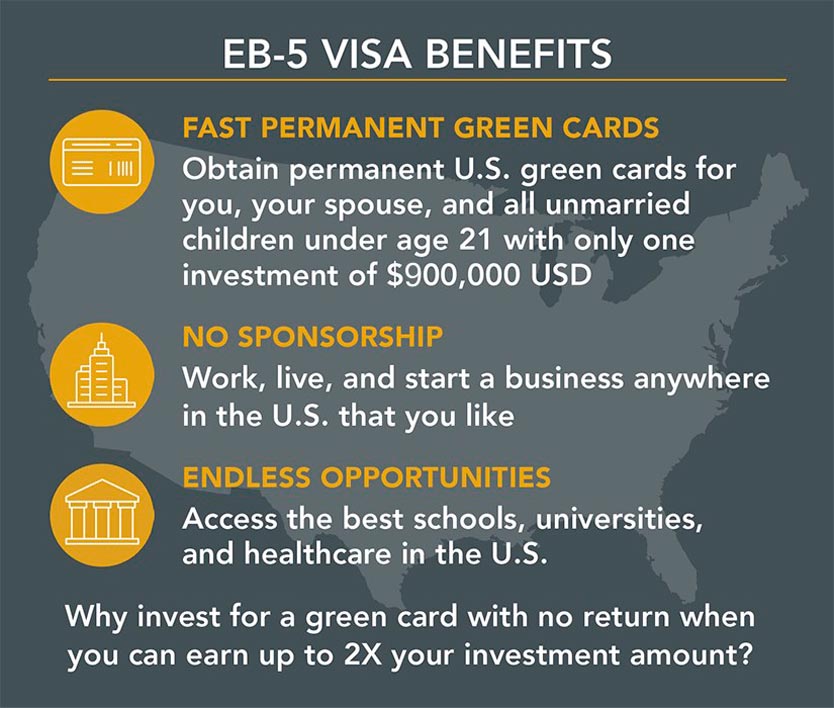 You can satisfy the program requirements directly on your own or with the help of a regional center. The latter notion describes a legal entity, state or private structure which received the U.S. Citizenship and Immigration Services to attract and pool the applicant’s capital under the EB-5 program to create full-time jobs (that is the requirement in any case). That means the participant must invest the required amount of capital in a new commercial enterprise that will create working positions for at least ten qualified employees. Each office is responsible for a specific geographical area, contributing to its economic development and overcoming unemployment.       Investing through the regional center provides two important benefits:

Among the EB-5 prosperous features for Hong Kong expats, the following should be mentioned:

It depends on the country and the particular situation. The fastest cases can be solved in twelve-eighteen months.

Analysts believe that reputation losses caused by the economical breakdown and political uncertainty influence the migration rates greatly. For wealthy citizens, it may be more profitable to run business in a more stable social and financial situation, thus protecting the fortune’s and family’s future.

The EB-5 visa is the best solution for those Hong Kong residents who have big capital and want to immigrate to the United States. It allows applicants to simply obtain permanent resident status and then citizenship. This program was created in 1990 but has really gained popularity in the last few years. In 2005, a […]

Sudden price increase of the EB-5 visa from $500,000 to $900,000 is probably the most discussed topic in the field of investment migration nowadays…

The island of St. Lucia is proudly known as one of the biggest Caribbean islands. The country’s business environment has attracted many immigrants from all over the world. And that is only one of the things that make St Lucia a great place to enjoy a fantastic quality of life. But what you probably didn’t know — this country is highly-popular among American CBI investors physically relocating to Saint Lucia!

Piping hot info on EB-5 US visa by investment

Fifth preference employment-based US visa program, or EB-5 for short, has always been popular with non-US residents. It is widely regarded as one of the quickest…

Second citizenship as a pathway to USA residency

The E2 visa is a treaty visa that encompasses a handful of nationalities, and it is a non-immigrant visa that grants its holders the opportunity to reside and work in the USA hassle-free.

Taking into consideration the modern problems the RSA faces, it is not surprising that local people are looking for better living conditions. That’s why the opportunity to become a permanent European resident is so widespread and even beloved.