The authorities will be entitled to withdraw citizenship acquired for investment within 10 years from the date of naturalization. There might be various reasons for that including non-compliance with moral standards. According to the Cyprus Mail, rules of the Cyprus CBI program have been officially amended.

The country’s authorities aim to protect their citizenship by investment program as much as possible from controversy and criticism of the European Union. Potential reasons for revocation of citizenship include the following:

Furthermore, an investor can be deprived of citizenship for “reasons of public interest” such as “ethic nastiness/moral turpitude/opprobrious conduct“. According to the Republican Prosecutor General’s Office, this term may include fraud, theft, deception or crimes of a sexual nature.

Under the new amendments, managers and firms that help investors with a questionable reputation will be subject to fine of up to € 350,000. Companies in the immigration citizenship market will undergo compulsory licensing with regular re-confirmation of their permits to operate. Without such licenses, the agent will not be able to work with investors.

Now, screening of all program participants will become even more thorough.

However, having tightened up certain rules, the Cyprus authorities also introduced some concessions. Thus, public officials who held the office in other countries will be able to apply for Cyprus citizenship only a year after their dismissal from the respective office. Previously, the stipulated period was 5 years.

Furthermore, the investor’s family members will now be able to apply for citizenship at the same time with the main applicant. Eligible family members include: the spouse, children, and grandparents on both sides (formerly, the application could include the investor’s parents only). Previously, relatives could participate in the program only after approval of the main application.

However, there’s a provision that the spouse’s parents are eligible to apply for citizenship if they purchase a property in Cyprus for at least €500,000.

The authorities confirmed that, unlike their colleagues from Malta, they will not go public with personal information about foreign nationals, their family members and investment data.

The amount of non-refundable donation has been increased to € 200,000. The annual quota of passports will be set at up to 700 pcs. 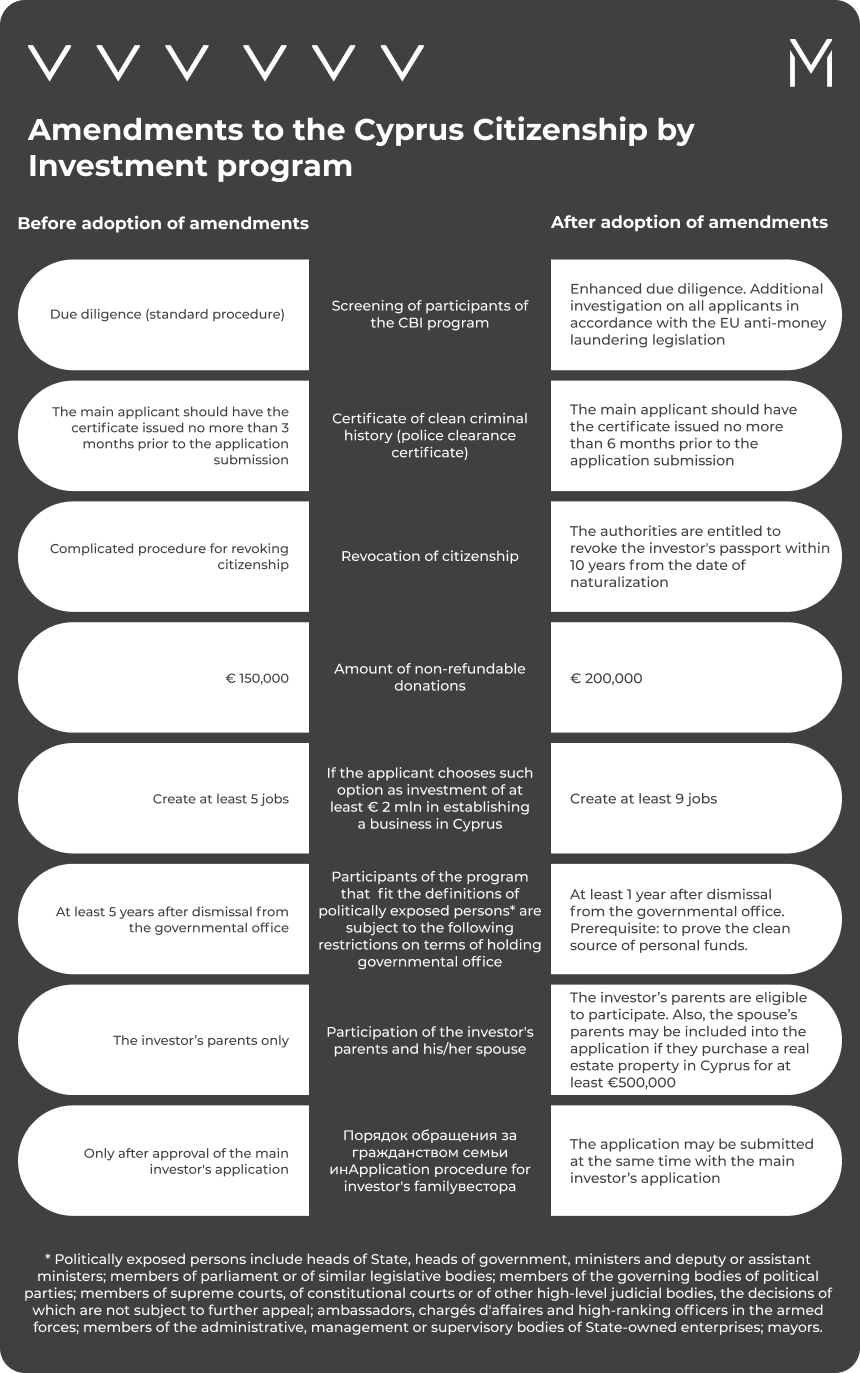 This EU member-state has been offering foreign investors its citizenship for investment of at least € 2.15 mln into real estate or business since 2013. Over the years of program implementation, about 4,000 passports have been issued, and the Republic’s economy has received about €7 bln from investors. As to the global passport ranking, Cyprus is 16th, and its citizens have visa-free entry to 174 countries.

Follow this link for more information on terms and conditions applicable to acquiring a passport of this country.

Please note that due to amendments to the rules of this program, the preliminary due diligence shall be performed before filing the application. This is an essential way to assess the actual chances for approval. Migronis conducts preliminary due diligence in full compliance with the updated standards of the Cyprus CBI program. All twists and turns to be catered for prior to commencing the procedure of acquiring a Cyprus passport can be clarified with the consultants via the chat window.

Real estate in Cyprus: Detailed guide to buying property to further obtain the passport of Cyprus

Cyprus has gained the reputation of one of the most popular locations for buying real property for investment purposes. Beyond that, purchasing an apartment…

Citizenship by investment: 7 foreign countries to consider for a second passport

If you are interested in buying property to obtain citizenship of another country, you have at least 5 options to choose from. In this article, we’ll name countries…

Cyprus citizenship by investment: Changes in the CBI program

The Council of Ministers of the Republic of Cyprus has made a decision to set a quota for the number of Cyprus citizenship by investment program participants.

A passport of a European country provides a plethora of opportunities for business development on the international arena. It guarantees a comfortable life…

In the first quarter of 2018, the number of real estate transactions in Cyprus increased by 41% compared to the same period in 2017. According to the Cyprus…

Buying property in Cyprus is not just a fancy trend followed by wealthy people, but also a profitable investment tool. By acquiring residential or commercial…