At the beginning of 2016, the value of such cryptocurrency as Bitcoin started growing fast, causing interest among people from various sectors of the population. Not many know that some people had managed to make a name for themselves in the field of mining before the latter became mainstream. Thus, 39-year-old millionaire investor Roger Ver, also known as ‘Bitcoin Jesus’ in the world of cryptocurrency, made a fortune, having invested in Bitcoin at an early stage.
Ver is known not only for his successful activities in the world of cryptocurrencies. There is something else peculiar about him. In 2014, he got a second citizenship of the Caribbean country Saint Kitts and Nevis and tried to set up a company to handle payments in bitcoin for real estate that would come with citizenship of Saint Kitts and Nevis.
World’s most famous cryptocurrency holder was born and raised in Silicon Valley. In 2005, Ver got into trouble for selling fireworks on the US eBay, then he moved to Japan. In February 2014, he became the citizen of Saint Kitts and Nevis.
As Ver himself points out, he obtained Saint Kitts and Nevis citizenship by investing bitcoins. Just like famous poker player Adam Bilzerian, Ver renounced his US citizenship in favor of Saint Kitts and Nevis. This move makes sense, since tax rates in the United States are rather high (with the income over $406,751, the estimated tax rate corresponds to 39,6%), while on Saint Kitts and Nevis citizens don’t pay tax on their worldwide income.
After receiving citizenship, Ver started attending various citizenship and migration conferences in order to tell people about Bitcoin, blockchain system and safe means of cryptocurrency integration. After getting the country’s passport, Ver said: “I am going to China to demonstrate the power of Bitcoin and explain that it is probably the easiest way of paying for things outside the country.”

The tax issue will soon become relevant for Bitcoin and other cryptocurrencies holders. Second citizenship and change of tax residence is a good solution in terms of taxation optimization.

After the price of Bitcoin started dropping, the cryptocurrency holders began to look for ways to invest their funds in something valuable. Therefore, since the middle of 2017, there has been an increase in the number of applicants who tried to purchase citizenship with bitcoins under official citizenship by investment programs. 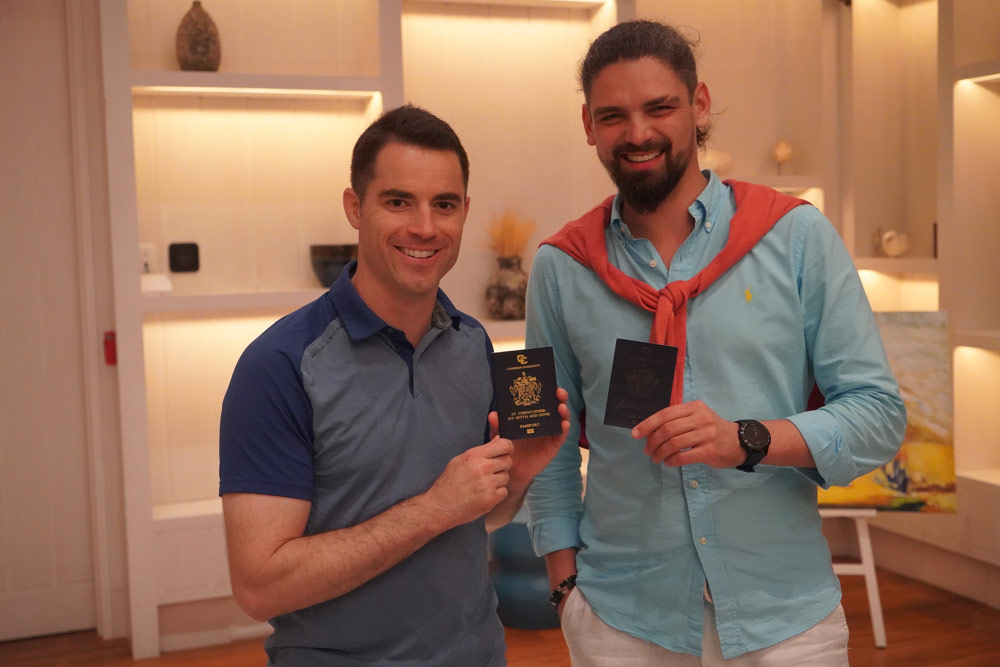 Why Saint Kitts and Nevis citizenship? Here is our detailed reply

The passport of Saint Kitts and Nevis offers numerous advantages. This Caribbean country has white-sand beaches with clear sea and pleasant climate, but apart from all these, Saint Kitts has no world income, wealth or inheritance tax. In addition to that, its citizens receive the opportunity to travel visa-free to 125+ countries and the opportunity to get 10-year multiple entry visas to the United States and Canada.
Saint Kitts and Nevis offers confidentiality and privacy to individuals from politically and economically unstable countries. No personal information will be disclosed to any public body of your country of origin.
Apart from that, one does not have to visit the island to submit the documents or obtain the passport.

Reasonable price is another ground for choosing Saint Kitts and Nevis. Now is the best time to start the document processing with the aim of getting a second passport. But why? On March 21, 2018, the government of Saint Kitts and Nevis has announced that the Sustainable Growth Fund will be launched to replace the Hurricane Relief Fund (HRF) that was temporary but successful investment option. A minimum investment for a single applicant will be $150,000, for a family of 4 – $195,000. If you want to get your second citizenship at a reduced price, you should launch the application process after April 2 when the new fund will be officially launched!
Famous cryptocurrency holder Roger Ver received his citizenship by investing at least $250,000 into the State Fund and reportedly used bitcoins as the payment method. So why not to follow his footsteps and get another passport even at a more reasonable price?

Tax residency in St. and Nevis: freedom for your wealth

A tax resident is someone holding a resident card and living in a country long enough for them to become eligible for taxes. In St. Kitts and Nevis however, this concept differs

At the beginning of 2016, the value of such cryptocurrency as Bitcoin started growing fast, causing interest among people from various sectors of…

A cost breakdown for obtaining a St. Kitts and Nevis passport through investment

St Kitts and Nevis CBI program is amongst the best options for high-net-worth individuals seeking a cost-effective and expedited solution to obtaining a second citizenship and passport for the ease of visa-free travel for themselves and their family members.

St. Kitts and Nevis the best option for offshore business

Nevis is competitive offshore banking and company formation capabilities with its stable political and economic system. Find all information about its options in article

Passport of Saint Kitts vs passport of Antigua: Which wins?

The reduced costs of St. Kitts & Nevis and Antigua & Barbuda passports have boosted the interest of investors in the respective citizenship by investment programs of these countries.

The prime minister of Saint Kitts and Nevis, Timothy Harris, met with Canada’s Immigration Minister Ahmed Hussen and some of the top MPs in the federal government on October 30, as part of his official visit agenda. Mr Harris urged Ahmed Hussen to return

New terms of Saint Kitts and Nevis citizenship by investment program: the price for passport goes down

The St. Kitts and Nevis citizenship by investment program is widely recognized for being reliable and having well-established action mechanisms.