«Bitcoin family» Taihuttu has decided to emigrate to Portugal due to its favorable tax regime and a 0% tax on cryptocurrencies. This story has become viral. Actually, many crypto investors already relocated to Portugal with the help of the Portugal Golden Visa.

Who is «Bitcoin family»?

«Bitcoin family» is a Dutch family of five (husband, wife, and 3 pretty children) who chose to live under the new rules, and they can certainly be called Freedom Unlockers (something we at Migronis highly appreciate).

So, they are free. Independent. And just happy.

In 2017, this family sold everything and turned the property into Bitcoin. Today, they visited 40 countries paying for everything with digital money. On their website they say that want «spread the message and spirit of freedom and a life with Bitcoin».

In fact, no one knows the exact amount of digital money the family possesses. The 43-year-old father claims that he keeps all savings on 4 continents.

Portugal — a vibrant place of crypto life in the world

Did you know that Portugal hosts a lot of crypto-focused events? (such as the Solana Conference and Web Summit). This helps bring more crypto luminaries and make this country literally a home for crypto-minded people!

Want to join this thriving Portuguese crypto community? Then Portugal Golden Visa is just what you need!

What is the main allure of Portugal?

They have not obtained any real estate and do not have a bank account in any country. Just yet. Portugal appeared to be an ideal destination for these crypto lovers who finally settled down. In fact, choosing just one country to live is a huge deal for this family.

Didi Taihuttu, the father of the so-called «Bitcoin family», says Portugal is «a very beautiful Bitcoin paradise». One of the reasons is that «You don’t pay any capital gains tax or anything else in Portugal on cryptocurrency». And this is quite beneficial for crypto enthusiasts.

«If you earn cryptocurrency by providing services in Portugal, you need to pay tax on those cryptocurrencies, but I don’t earn anything, at the moment, in Portugal. So, for me, it’s 0% tax», a housefather says.

Portugal tax system stands in stark contrast to the one of the US. It is common knowledge that the States treats digital currency as property and taxes it similarly to stocks or real estate. These new guidelines affect many brokers, and it’s not just about the US.

China, India, Russia and most other states make life very unpleasant for crypto traders. But the good news is that we at Migronis made a list of crypto-friendly countries, and you can check it here.

Then read this guide and get insights about all the nuances! 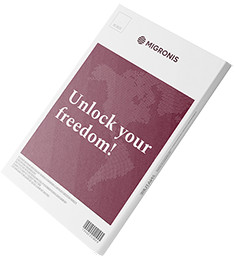 In Portugal, «capital gains coming from crypto transactions such as cashing out and crypto-to-crypto trades are not subject to personal income taxes», highlights Shehan Chandrasekera, a CPA and head of tax strategy at CoinTracker.io.

This simply means that any gains from selling or buying crypto are not taxable, just like gains from other fiat currencies. Furthermore, cryptocurrency transactions, payments, or conversion of bitcoin into a fiat currency are not subject to VAT.

As an example, the US unicorn Anchorage, a crypto bank cofounded by Portuguese entrepreneur Diogo Mónica, has an office in Porto. It also plans to open another in Lisbon.

Portugal — the road to make all your crypto business easier, tax-free, and more efficient. New residentship can also potentially give your business a huge boost in profitability and growth.

The procedure of gaining residency in Portugal is quite simple. For example, the Taihuttus are official residents of Portugal despite not owning property in this country. They also don’t need to live for years in this place in order to obtain or keep this status. No doubt, Taihuttus decided on big changes in their lives. And saying «the secret of happiness is freedom and the secret of freedom is courage!» is proudly known as their motto.

The «Bitcoin Family» isn’t the only one that changed location. Portugal was ranked 4th, according to the Global Peace Index in 2021, and following the population census of the previous year in Portugal, the number of foreign inhabitants has increased by 40%.

Portuguese blockchain community is known for such famous projects:

Do you want to become a resident of the main crypto hub in Europe? Then talk to our experts and find out how

Previously we mentioned that the «Bitcoin Family» belongs to Freedom Unlockers. And you may wonder who they are?

Jumping ahead: The founder of Migronis, Anatoliy Letayev, is also a Freedom Unlocker. Furthermore, these are many famous people that you have certainly heard of!

Freedom unlockers are action takers and impact makers who think out of the box. They are open to exploring something new, and they know the world is open for all.

Freedom unlockers have existed for many centuries. It’s just about your curiosity. You certainly know about Christopher Columbus. Despite some enormous challenges, he found the ‘New World’ of America. For now, he is known as one of the greatest mariners in history and can be easily ranked as a freedom unlocker. The same goes for Elon Mask (who wants to colonize Mars) and many other prominent people.

So, this is also about Migronis and our founder.

Looking for personal sovereignty 10 years ago,  Anatoly Letaev became a resident by investment in Europe and Vanuatu. And today he:

Portugal Golden Visa is one of the most popular ways to get a residency in Portugal. This fast-track process helps you obtain citizenship in a European country in as little as five years. This path requires purchasing a property or investing a particular amount of money in Portugal’s economy.

The good thing is that investing in residenship is a simple procedure, which does not require the family to jump through many hoops.  So, if you decided on Portugal, just like «Bitcoin family», what will you get from the Portugal Golden Visa?

Let’s see our best examples of Portuguese real estate and learn about conditions of funding to get the Portuguese Golden Visa!

Portugal offers different options if you want to get residence of this country via investment. Below you’ll find out how to get Portugal Golden Visa%

Besides, did you know that you can also get real estate with the help of cryptocurrency? This means that buying property for a second passport is as easy as an apple pie! Check out this article and find out how to settle it all.

Want to know everything about getting citizenship/residency for crypto investors?

Read our most detailed guide on getting crypto citizenship and get a free consultation to learn more details!

The Portuguese government introduced Portugal Passive Income Visa in 2007, which immediately caused a great stir among pensioners, entrepreneurs, and other ex-pats living off of a recognized stable income.

The new project – the Royal São Paulo hotel in the “royal village” of Vila Visosa – is the cheapest option for obtaining a residence permit today.

How to Retire in Portugal: an inspirational story of the US entrepreneur John Bandak

An inspirational story of a successful American entrepreneur John Bandak shows how to benefit from moving to Portugal’s southern region Algarve for retirement.

Did you know that digital assets are tax-free in Portugal?

Portugal has established its reputation as one of the best crypto tax havens worldwide. And this is not for nothing.

What do migrants look for in a new place of residence?

The relaxed pace of life, high-quality medicine, a decent income, friendly environment… this list can be endless.