Adam Bilzerian, the famous US-born poker player/private investor, is talking openly about what motivated him to seek another country’s citizenship, and why he ultimately dropped the idea of relocating to Austria and opted for St. Kitts and Nevis instead.

As an agency that helps financially independent individuals find the perfect second homeland, we have, along with multiple similar businesses, noticed the growth in demand for second citizenships. As distinct from each other as they are, our clients are unanimous in their pursuit of free movement across the world, limitless ability to reside and work in more countries, tax optimization opportunities, safety and security for their loved ones and assets.

Not getting to enjoy and utilize a fuller set of freedoms with their primary passports, wealthy and influential people enter the realm of exclusive citizenship by investment offers.

The story of Adam Bilzerian

Wherever your interests may lie, you must have heard the name Bilzerian. Perhaps you are familiar with the lush adventures of Dan “King of Instagram” Bilzerian, or at some point followed the updates on the family patriarch Paul Bilzerian’s multi million-dollar court saga.

There is also a third man in this family, Dan’s younger brother Adam, who, by the looks of it, tries to avoid the spotlight, but whose life choices are no less interesting than those of his parents and brother. It all started when a corporate takeover specialist Paul Bilzerian, 67, was accused and convicted of fraud in 1989.

Investigations by the Securities and Exchange Commission and court rulings ended in a $62 million judgement against him and a prison sentence. Over the years, Bilzerian served 13 months in jail (out of 4 years), declared he was bankrupt, sold his Tampa mansion and, together with his wife, relocated to his son’s quarters in Saint Kitts and Nevis.

His sons grew up in his sprawling mansion, both are described by the GQ magazine as having a near-genius IQ, both have a military background, both play poker professionally, and both were given a headstart with Paul Bilzerian’s funds. Yet, in one of his Instagram posts, Dan has remarked how, despite him and his brother “coming out of the same place,” their lifestyles differ greatly.

Dan is a somewhat controversial celebrity, Adam has two kids and is married. In the same vein, brothers Dan and Adam didn’t make similar decisions when they witnessed their father’s downfall.

While the older brother remains a US citizen, his younger sibling was disheartened by the way the government treated his father to the point where he obtained a passport of St. Kitts and Nevis, and renounced his US citizenship.

How Adam Bilzerian settled in St. Kitts and Nevis

Though renouncing one’s citizenship is a cardinal step, and circumstances surrounding the quest to obtain a second passport do differ, there is always a common economic component. Whatever the situation, if one is in the position to turn investment in St. Kitts and Nevis’ economy into their passport, it is a no-lose situation.

Oh, and St. Kitts and Nevis allows dual citizenship, details of the deal are confidential and are not disclosed to the authorities of one’s primary country of residence – so, no need to follow in the youngest Bilzerian’s footsteps.

The poker player initially considered Austria as his second home but was discouraged by the cost and strict requirements. After studying the CBI market, Adam Bilzerian applied for Kittitian citizenship, invested $400,000 into a hotel project, and became a citizen within a year.

He currently resides in the two-island country’s capital, Basseterre, occupying one of the St. Christopher Club condominiums on the Frigate Bay.

Speaking about real estate investment, new citizens, in order to retain the status, are obliged to hold the property for five years, but it is possible to re-sell it after that.

Why St. Kitts and Nevis will work for you

Saint Kitts and Nevis is a two-island nation in the Caribbean Sea, well-known for its CBI program. The passport unlocks the doors of over 156 countries, EU member countries included, and makes acquisition of a long-term US visa much easier.

Adam Bilzerian does reside in the country, but there are no residence requirements for investors neither prior to nor after application processing.

The process doesn’t take longer than 5 months and is mostly handled by accredited, government-approved agents, so there is minimum involvement on the investor’s part. Many other Caribbean island nations are offering their passports in exchange for foreign investment. Among Dominica, Saint Lucia, Antigua and Barbuda, and Saint Kitts and Nevis, it’s the latter that has the most popular CBI program, partially because it has been successfully functioning since 1984.

While Adam Bilzerian chose the option of investing funds in real estate in St. Kitts and Nevis, the country has more options for the applicants. One such option has only been introduced recently and is temporary: the Hurricane Relief Fund donation that starts at $150,000. 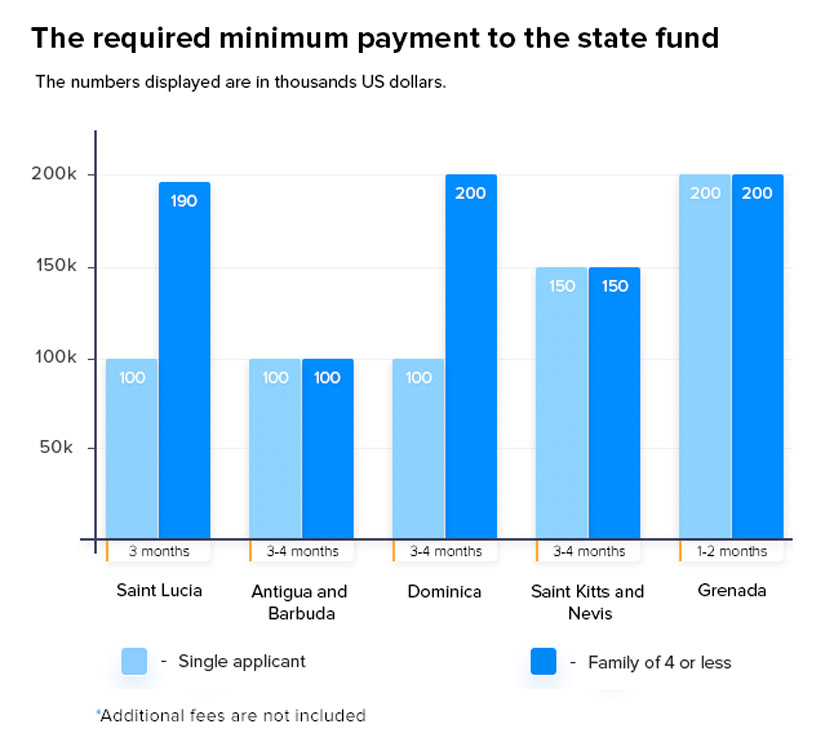 We urge our clients to compare conditions of the various CBI programs. This helps them make up their minds and opt for what suits them best. Speakig of Caribbean nations, we can name at least three reasons to strongly consider one of the countries in the region as your second home:

Antigua and Barbuda passport: visa-free entry to over 151 countries; passports are issued within 3-5 months.
Dominican passport: visa-free entry to 137 country; passports are issued within 3-6 months; no residence requirements; no personal interview.
Get a Free Consultation
Get a free consultation
Please enter your contacts
TOP articles

Grenada citizenship VS citizenship of Antigua: which one is the most favorable based on costs and conditions?

Caribbean citizenship is a chance to freely travel to the United Kingdom, the Schengen countries and many other jurisdictions. It also offers a wide range of…

Dominica: All you need know about education, medicine and life on the island

Dominica’s economic citizenship program was launched in 1993, however, it gained its popularity only in 2015 after the EU countries signed an agreement…

All you need to know about Antigua and Barbuda

Originally, the Maltese government planned to accept not more than 1,800 new citizens who submitted their applications…

Before we go into specifics, let’s determine: What is a Golden Visa, exactly? Some European countries are offering their residence permits…

Is there a surefire way for an accomplished businessperson to guard themself against political and economic risks happening in their home country?

What Turkish investors see in Greek Golden Visa, and you should, too

There are several ways to gain residence in the European Union (EU), one of them is to invest in real estate…

Real estate in Cyprus: Detailed guide to buying property to further obtain the passport of Cyprus

Cyprus has gained the reputation of one of the most popular locations for buying real property for investment purposes. Beyond that, purchasing an apartment…

A 360-degree review of revolutionary Cyprus Citizenship by Investment program

Security and stability, the two pillars of business management so valued by respectable businessmen and financially independent individuals…