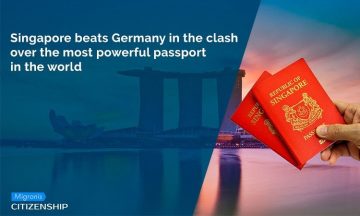 Which countries have the most valuable citizenship and can be considered as a possible “second home” for world’s highest earners?
Right now, the country with the most powerful passport in the world is Singapore. In this article, we talk about how “passport power” is measured, what is the secret behind Singapore’s success, which citizenships are the most valuable in the world today, which countries might take leading positions in the future, and which countries with wide visa-free access are offering the opportunity to acquire a second citizenship by investment.

Singaporean passport, most desirable in the world

Not all passports have equal strength, as each country has its own number of destination accessible on a visa-free basis. Previously, the leadership position in the global Passport Index was shared by both Singapore and Germany, whose citizens had easy visa-free or visa-on-arrival access to 158 countries of the world. However, visa requirements for Singapore residents had recently been cancelled by Paraguay, and that’s how Singapore’s passport became the most desirable document in the world.
It is quite a historic event, as no other Asian country has ever been at the top of Passport Power list. But it didn’t happen thanks to sheer luck or coincidence. Singapore worked hard to achieve this level of “openness”. Since breaking off from Malaysia and gaining independence in 1965, Singapore’s authorities have maintained a sensible and far-sighted foreign policy line, viewing globalization as an opportunity for further development. In addition, unlike the European countries that are members of the Schengen Area, Singapore makes decisions independently regarding the abolition of visa requirements for citizens of other states. Singapore also does not impose visa restrictions simply because fellow members of the Association of Southeast Asian Nations did so.

Who else is in leading positions?

The top twenty of the Passport Index includes three other Asian countries: South Korea (visa-free travel to 157 countries), Japan (156 countries) and Malaysia (154 countries). Interestingly enough, the US passport has been losing points since Donald Trump was elected president. Two years ago, the US shared the first place in the Passport Index ranking with the United Kingdom, but last year, the Federal Republic fell to fourth place, and today occupies the sixth position in this ranking. Visa-free entry for US citizens has most recently been abolished by the Central African Republic and Turkey.
Meanwhile, South Africa holds 47th position (visa-free travel to 94 countries), India is 73rd (53 countries), and Turkey is 42nd (105 countries).

According to experts’ projections, small and “harmless” countries, and countries with flexible, tolerant policies are the two types of entities that will continue developing the potential of their respective passports, especially those where the rule of law is dominating. It is expected that Singapore will keep its position in the ranking; however, top ten positions could easily be occupied by new contestants. Members of the Organization of Eastern Caribbean States are showing promise: Saint Kitts and Nevis, Grenada, Antigua and Barbuda, Saint Lucia, Saint Vincent and the Grenadines, and the Commonwealth of Dominica.

To underline the powerfulness of the above mentioned passports, let’s look up countries whose passports have the least strength. Citizens of Somalia can visit only 33 countries without bothering to apply for a visa, Syrians can visit 29 countries, while citizens of Pakistan and Iraq – 26 countries. At the bottom position, in 95th place, is Afghanistan – empowering its passport holders to visa-free travel to only 23 countries.

Countries that unlock most doors for their frequently travelling citizens

The passport of Singapore was recognized as the most powerful per the so-called “visa-free” score. This ranking awards each state a “passport score” according to the number of countries that their citizens can visit visa-free,or get a visa upon arrival. The index takes into account the 193 member countries of the UN, as well as Taiwan, Macau, Hong Kong, Kosovo, the State of Palestine and the Vatican.
Other prominent methodologies exist that allow to determine “passport power”.
There is a “visa restriction” ranking based on the data from the International Air Transport Association. This annually-issued index examines 218 countries and territories of the world. In 2017, the first place was taken by Germany (visa-free access to 176 countries and territories out of 218). Sweden is in the second place (175 countries), and Denmark, Finland, Italy, Spain and the United States share the third place (174 countries).
Another ranking includes 199 countries and takes into consideration these 5 criteria: possibility of visa-free travel, level of taxation, global perception of the country, possibility of having dual citizenship, and general level of personal freedom. In 2017, this ranking was helmed by Sweden, Belgium came second, Spain and Italy ranked third, and Ireland rounded up the top 5 of most welcoming countries for wealthy individuals.

Is it possible to acquire a second citizenship?

The number of wealthy people ready to invest hundreds of thousands of dollars and euros in a second passport is growing every year. Global “visa-free” mobility has become a defining factor in the modern world, and people are happily utilizing the opportunity to protect their families and businesses from unforeseen obstacles.
But is it possible to obtain a citizenship of another country without having anything to do with the said country? Yes, it is, that’s what citizenship by investment programs are for. About a dozen countries in the world are offering their more powerful passports to potential foreign investors, respectable businessmen, and VIPs, in exchange for money injected into their economy.
One of the most popular European citizenship by investment programs was developed by Cyprus. By investing a sum of over €2 million in real estate, the applicant will receive the passport of this country in 3-6 months, and with it, visa-free access (or visa upon arrival) to 158 countries and territories around the world, the rights of a full-fledged EU citizen, and favorable taxation conditions.
Let us talk a little about the Caribbean countries mentioned in this article. In 2017, the Professional Wealth Management magazine, a Financial Times Group project, evaluated twelve CBI programs based on seven criteria. The top ten included the Caribbean programs, with Dominica ranked as number one. Not surprising at all, as Dominica’s program is highly reliable (launched in 1991), processing is fast, and costs affordable: the citizenship of this country for a sole applicant will cost a little above $100,000 (contribution to the government fund). Another Caribbean family member, Antigua and Barbuda, offers the lowest investment threshold for a family of 4 – the contribution is slightly over $100,000.

Second passport for purchase isn’t just a ticket to secure, tranquil future. It allows its holder to settle down practically in any part of the world. The government of any country is interested in attracting both foreign investments, and investors of good character. By competing with each other, each program seeks to offer the most comfortable conditions: freedom of movement around the world, reduction of tax burden, possibility of international cooperation, possibility to return the invested money and/or extract profit from investment. Family members can be included in the application for citizenship, and future generations inherit the citizenship automatically. 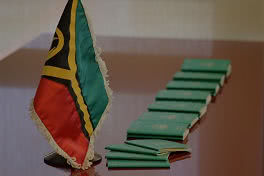