In the first quarter of 2018, the number of real estate transactions in Cyprus increased by 41% compared to the same period in 2017. According to the Cyprus Department of Lands and Surveys, from January to March, 2,129 purchase contracts were registered. A year earlier, during the same period, 1,505 real property items changed their owners.
What was the impact of the economic citizenship program on the Cyprus’ real estate market? What is the real cost of a villa in the jurisdiction? Where to find the most attractive options? Answers to these and other questions may be found in today’s material.

The financial and economic crisis, which lasted for several years, is left behind for the Eurozone. According to the official statistics of Eurostat, the member countries of the currency block have shown impressive economic growth over the past few years. Cyprus is standing out significantly. Fitch, an international ranking agency, has raised the country’s long-term credit rating by two points from “B-” to “B +”. Analysts point out serious improvements in financial management and give positive forecasts. It is worth mentioning that Cyprus had the lowest credit rating in the EU.

As regards the real property market, sales have been steadily growing for the past four years. To a large extent, such a heavy demand is caused by the state passport program, which is now one of the fastest ways to integrate into European society. Buying real property is the most popular investment option.
Since Cyprus’ territory is limited and there are not many new construction projects in recent years, real property items may be overvalued. In general, all is not so bad if choosing a property item is carried out with a responsible care. Cyprus property prices are high indeed, but the Mediterranean jurisdiction has many advantages to offer such as favorable tax environment, developed legal system, progressive healthcare sector, high-level of education. Therefore, the game is worth the candle.

Since 2014, the economic situation in Cyprus began to improve. This led to an increase in the number of transactions in the market. According to official data for 2016, sales have increased by 43%, and in 2017, they increased by another 24%. As reported by the Department of Lands and Surveys of Cyprus, in 2017 8,734 real property transactions were concluded (compared to 7,063 in 2016).
Territorially, the largest increase in 2017 was recorded in Limassol where the annual sales amounted to 36%. Notably, this district is the most popular location since 2010. Paphos also has the high rate which is 24% of the total number of transactions. Investors were also active in buying real estate in Nicosia (17%), Larnaca (15%) and Famagusta (7%).

A large percent of real estate buyers in Cyprus are Russians and Chinese. High interest is also shown by residents of the Middle East and post-Soviet countries. In total, 25% of the total number of sales transactions was concluded with foreigners. 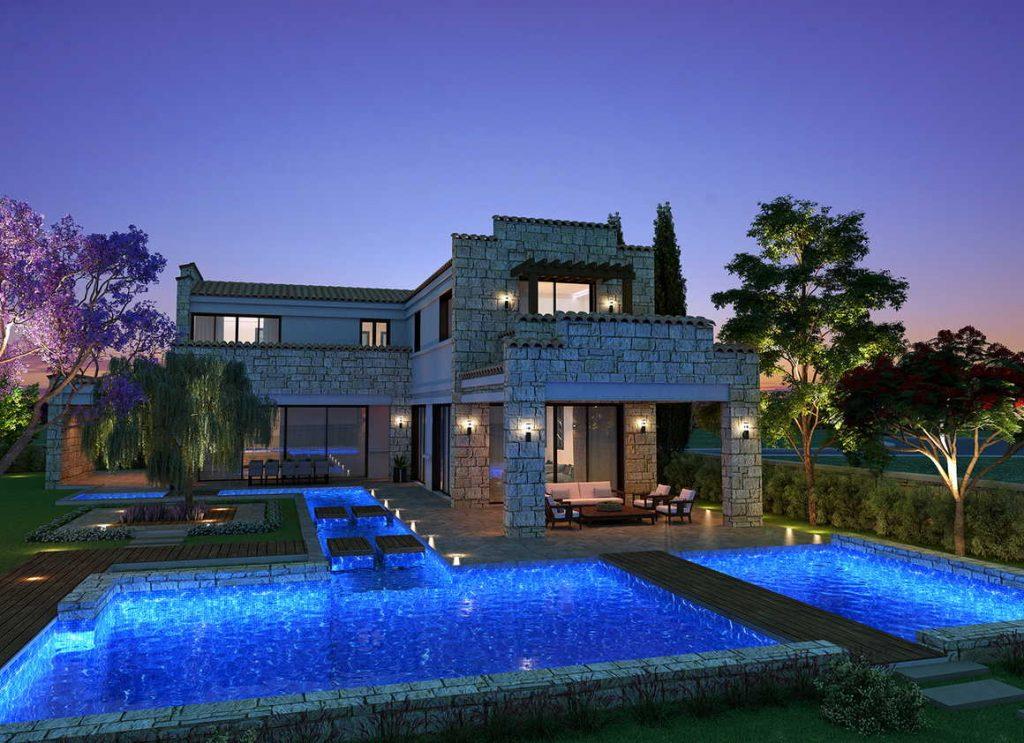 To take part in the passport program, it is required to buy a property worth at least € 2 million. The investor must own a permanent residence in Cyprus for a minimum value of half a million Euros for life. The remaining assets may be sold in three years from the date of purchase. Without loss of citizenship, only the heirs of the main investor are entitled to sell residential property worth € 500,000 after the death of the main investor.
The prevailing number of investors who do not plan to root in Cyprus are buying real estate the price of which is close to two million Euros. Some foreigners prefer buying several items. According to statistics provided by the Department of Lands and Surveys of Cyprus, in 2017 260 transactions were closed on the real property worth at least € 1.5 million, and in 2016 there were such 179 transactions. Typically, investors who are going to move to the island for permanent residence, choose housing which is more expensive than two million Euros.

Important note! According to Alexandros Mulas, director of the consulting company Savills International, 503 passports were issued in 2017, which is 60 more than in 2016 (only 443).

Is there a demand for Cyprus property without participation in a passport program?

A possibility to obtain an EU passport is a weighty but not the only reason to invest in Cyprus real property. What creates a demand?
Acquisition of real estate is the best investment as it allows not only to save, but also to increase incomes. The square meter prices are growing every year. It means that at the end of the retention period, some part (or possibly the entire amount) of the money may be returned into circulation.
Recently in Cyprus, there has been an active influx of new companies that relocate their offices. Accordingly, employees of such companies are facing the need for real estate. Ordinary employees are renting apartments, while senior managers purchase real property for permanent residence. The most attractive region for such buyers is Limassol.
Comfortable climate, beautiful coastline, developed tourist infrastructure, casinos are the factors that encourage foreigners to buy property in Cyprus. The most popular locations are Famagusta and Paphos.
Also, Cypriot real property is attractive to foreigners wishing to apply for a permanent residence permit.

The total number of contracts for the purchase of premium class properties (worth at least € 1.5 million) submitted to the Department of Lands and Surveys from 2010 to 2017 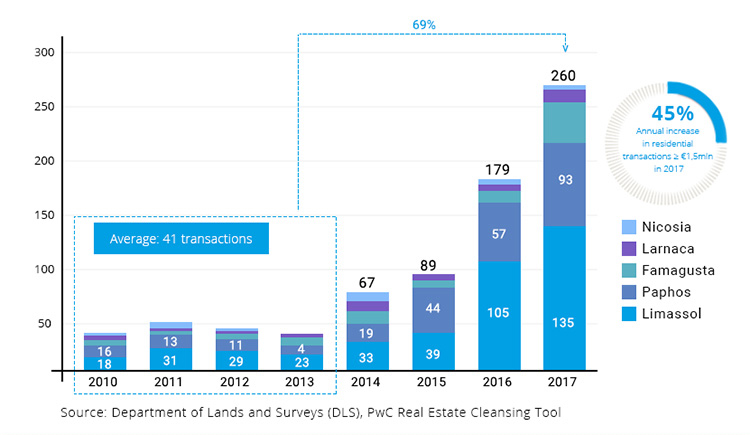 Secondary market of apartments in Cyprus is receding into the background. There are practically no secondary real property objects, especially in the premium class category. Today, new houses are being built, which form a completely new look of the real estate market in Cyprus. High-tech buildings, modern design, premium finishing  – all this suggests that large-scale projects are currently on trend. These new projects are the only factor that allows to raise the quality of local real property to an international level.
Important note! When buying a new property, the buyer does not have to pay a property transfer fee that allows reducing the amount of additional fees. 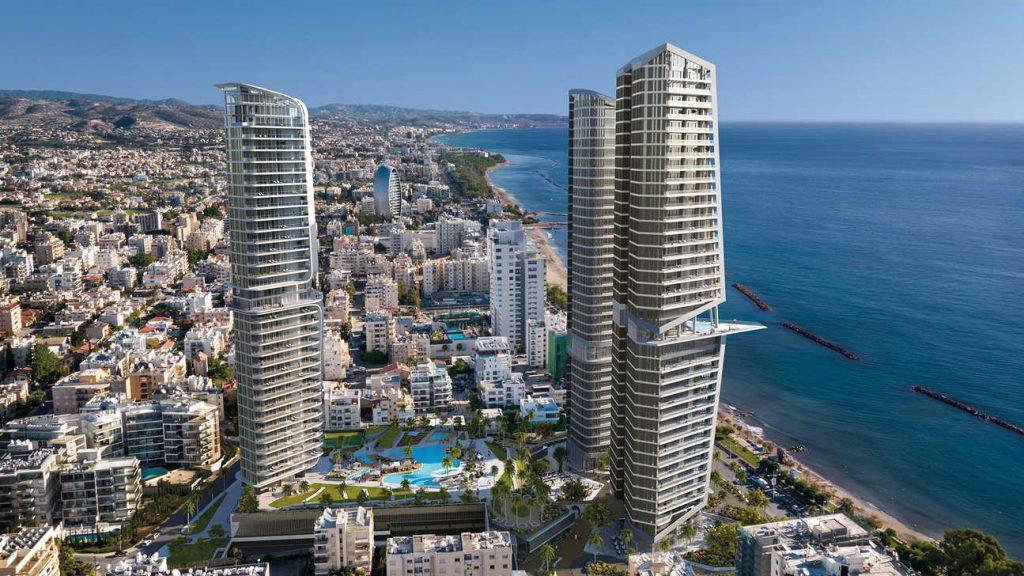 Limassol is the business center of the Republic of Cyprus

How to buy property at market value?

Before signing a contract of purchase, you need to get a complete and adequate idea of pricing and a list of offers on the market in broad terms. To avoid mistakes and protect yourself from the acquisition of a non-liquid or overvalued object, we recommend consulting a specialist who understands the market, its moves and prospects.
Also, you should avoid unlicensed agents, which are in abundance, by the way. Their goal is to sell the object by any means. Such “estate agents” will never give you a proper understanding of the market, that may lead to making a mistake when choosing the object and, as a result, buying real property at an excessive price.

Who buys property in Cyprus, except for Russians and Chinese?

A large percent of property buyers in Cyprus consists of citizens of Russia, CIS countries and China, but investors from the Middle East are also very active. This is due to the unstable situation in the region. The Paphos district is still popular among British citizens.

Property in Cyprus - a promising investment

Buying property in Cyprus is the key to an EU passport. This is an excellent opportunity for people with a high level of property capital to create a “reserve airfield” outside their native country, expand visa-free horizons and optimize taxation.

Grenada citizenship VS citizenship of Antigua: which one is the most favorable based on costs and conditions?